It's been awhile since I was able to update both my flower bed and veggie gardens.  The veggie garden is sadly no longer active, but I have plans for that.  All I need are some helping hands, because I was really tired after I finished what little I accomplished on Saturday. 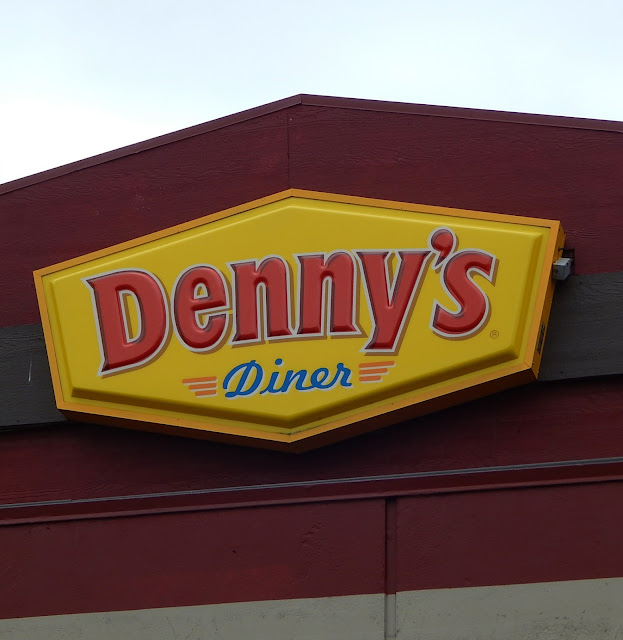 I'll begin by showing where I went for my free bEARTHday breakfast.  I'll keep you in suspense, though until T next Tuesday. 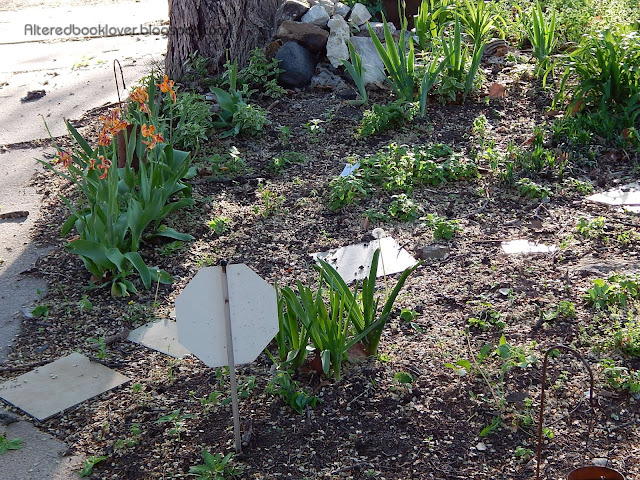 I came home to change clothes before going to my next function, which was with my no-names, no-faces group.  I noticed how sad some of my earliest blooming tulips were beginning to look. 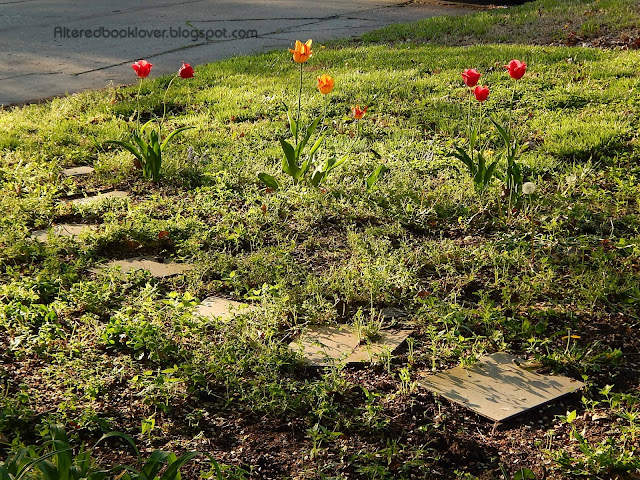 It wouldn't be long until 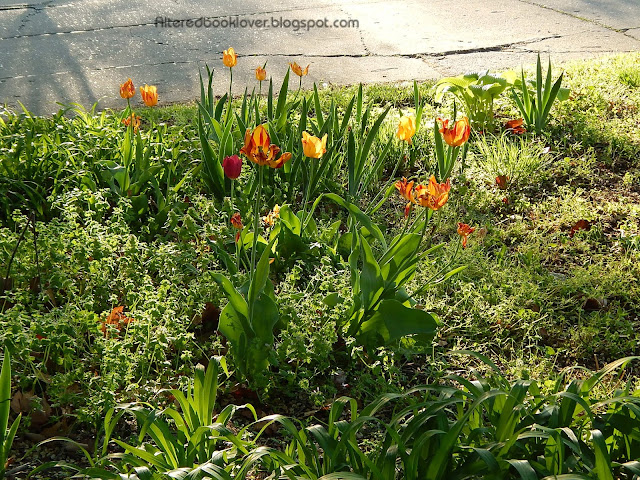 all my tulips would be no more than a fond memory this year. 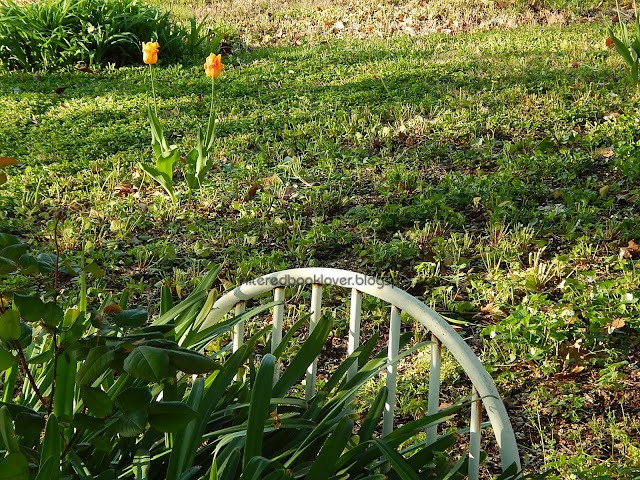 Last year, not a single tulip bloomed, so I was quite happy that even ONE bloomed, much less so many. 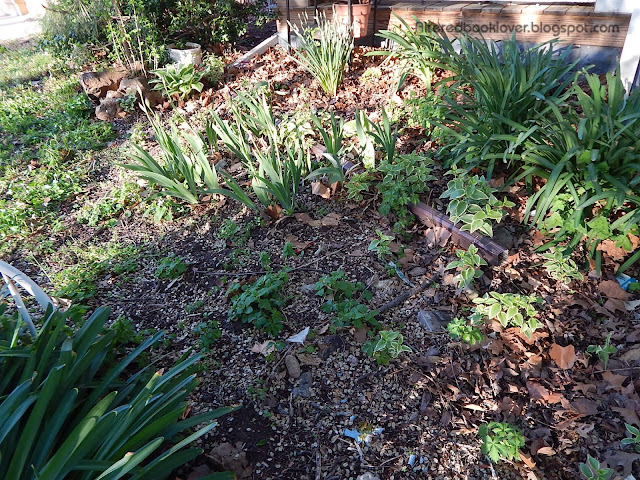 Although they are hard to see in the late afternoon sun, my irises are about to bloom, too. 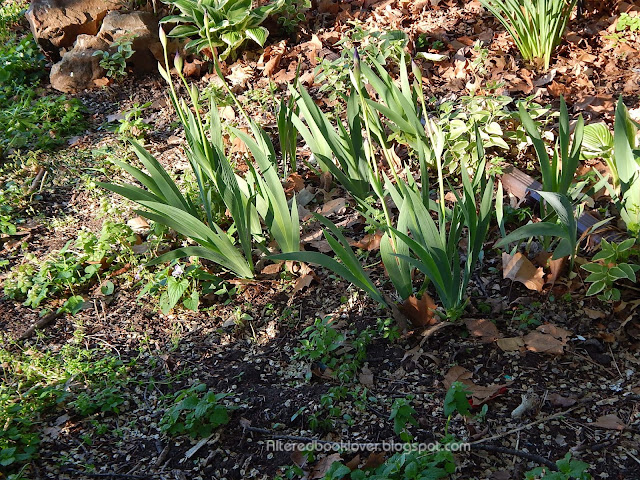 They certainly blend in with the landscape, at least until they bloom. 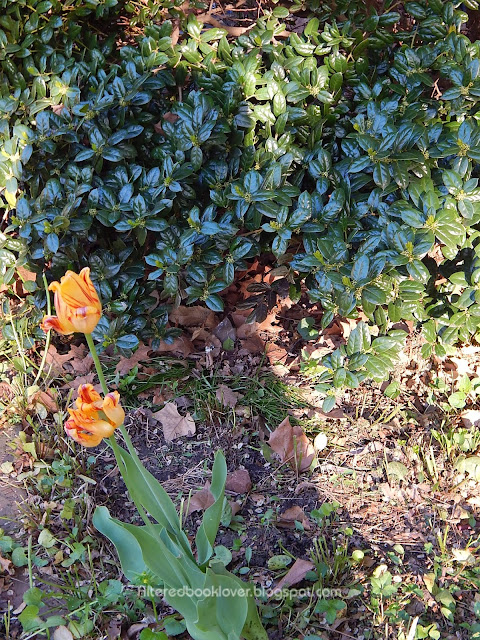 My friend Angela pointed out the reason I have not nor will I ever have holly berries on my holly bush is because you must have both a male and a female bush in order to make berries.  Go figure. 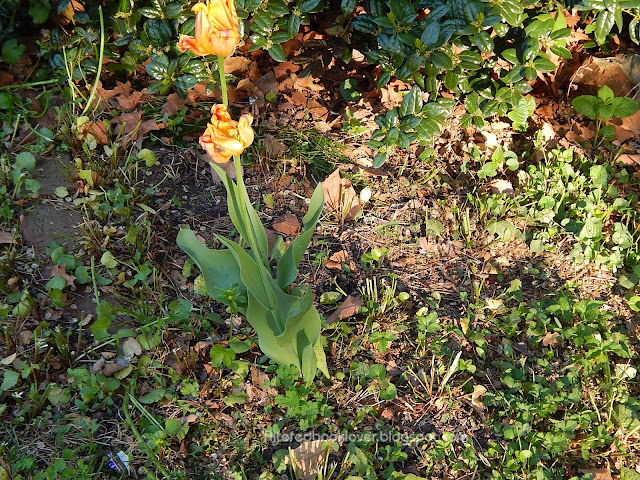 These were on their last petals, too. 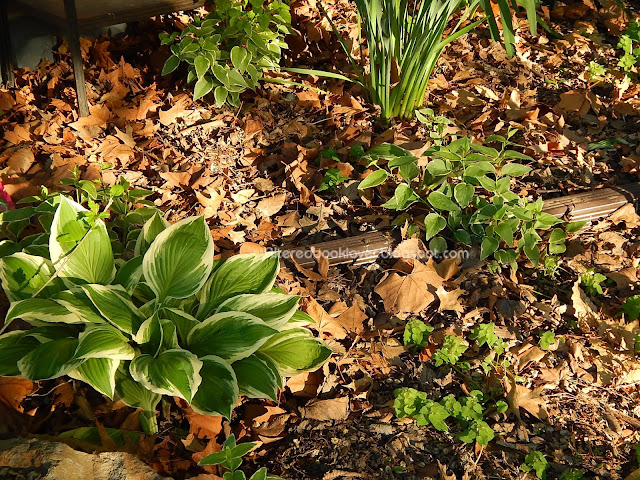 I dug up a good portion of my hosta on Saturday after I mowed the lawn.  I was going to move the drainage piece that had once gone to my "fish pond" I removed last year, but I learned it was screwed in place, so I left that for another day. 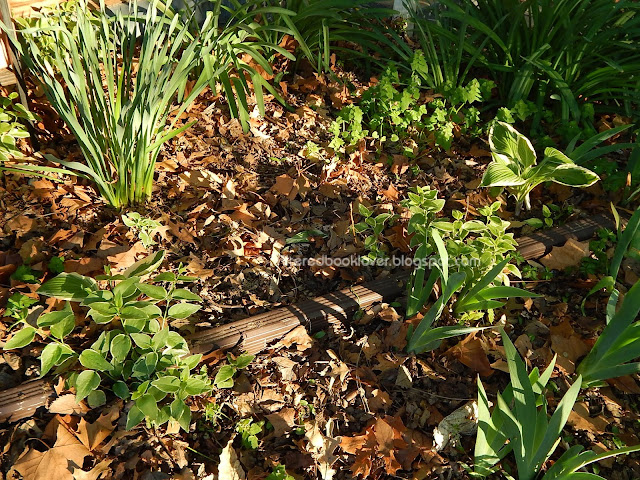 I cut the hosta into three pieces, but one isn't doing well.  In fact, you can barely see it, but if you look above the "lre" of my watermark, you might be able to see it.  The other two, on either side, seem to be doing well. 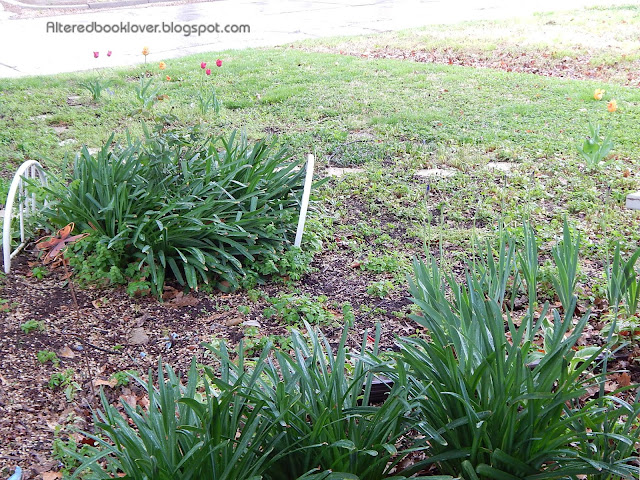 Fast forward to Tuesday morning (April 23), and this is what I saw. 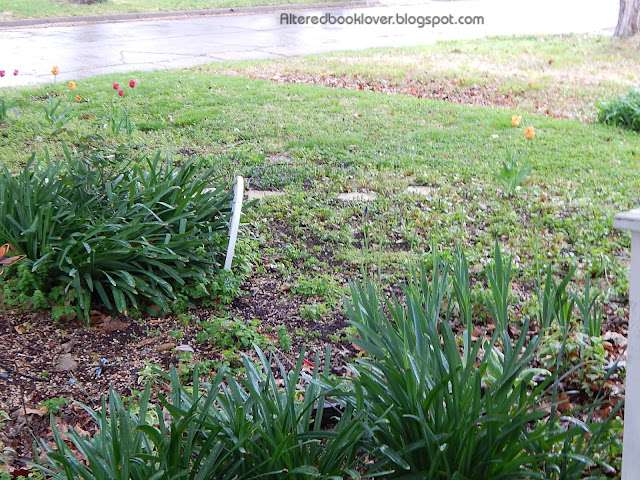 You may not be able to tell, but it is raining rather hard at the moment. 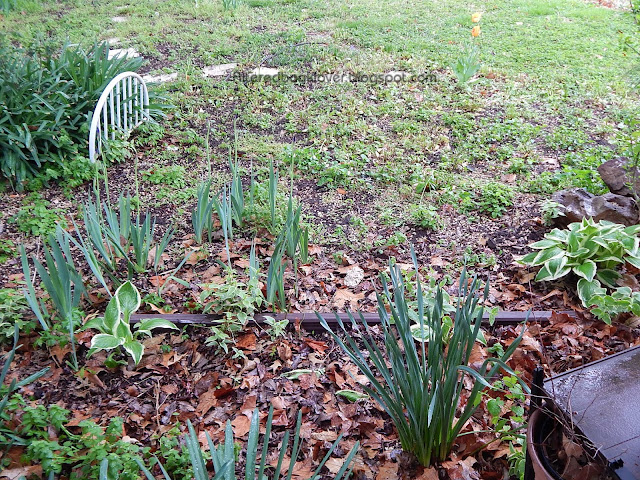 Two of the new hostas are doing fine, but I have my doubts on the third one.  The one on the far side of the drainage pipe is the mother plant.  I need to move the ugly plant stand to the back or get rid of it all together.  It is disruptive. 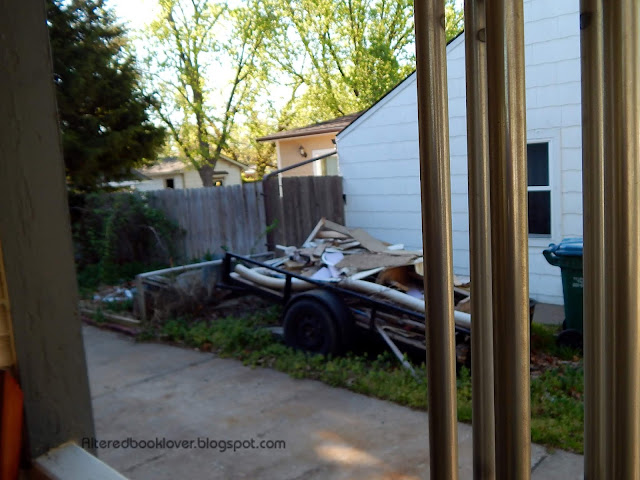 Some of you were here when I showed where I got wood from my neighbor's trailer. 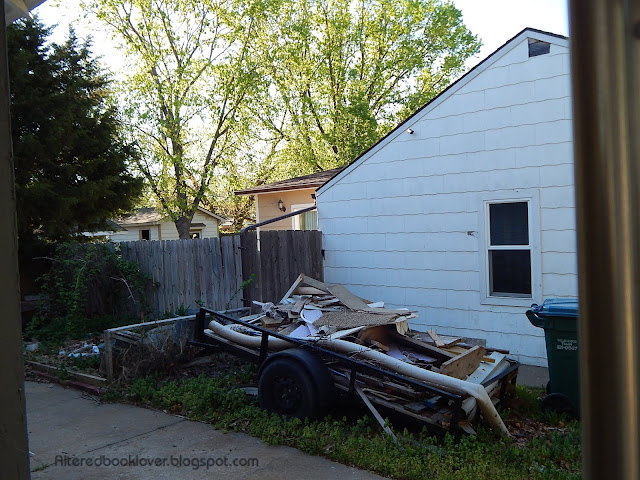 I actually was planning to show my unfortunate veggie garden, but got caught up with making art and showing how I actually recycle from my friends and neighbors trash. 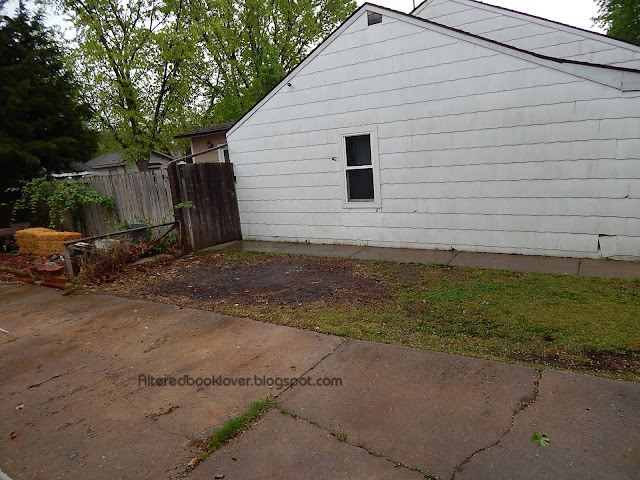 Imagine my surprise on Tuesday when I walked outside and saw the trailer was gone.  Had I not taken a photo of the trailer early Saturday morning, you would never have believed from where the wood came. 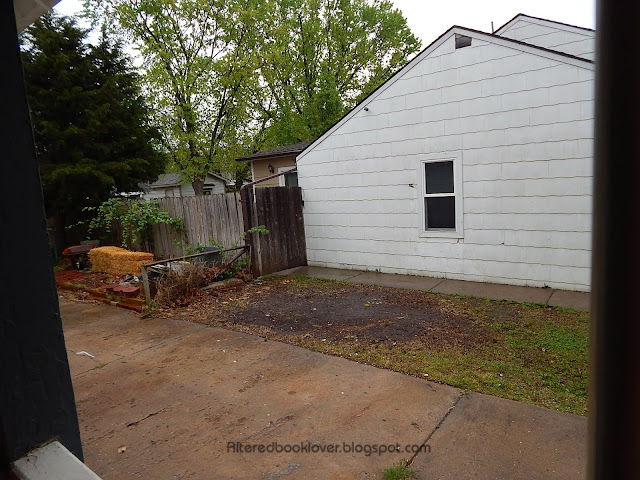 I even tried to stand in the same spot to show where it had been.  My neighbor must have cut the strip of grass in between our two houses, too because I didn't do it on Saturday. 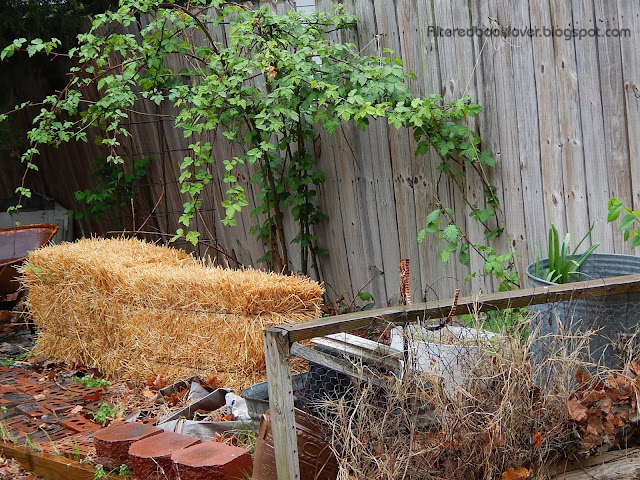 On Saturday after mowing, I tried to place all the bricks around the now defunct veggie garden.  I also cut the blackberry bushes back a bit, too. 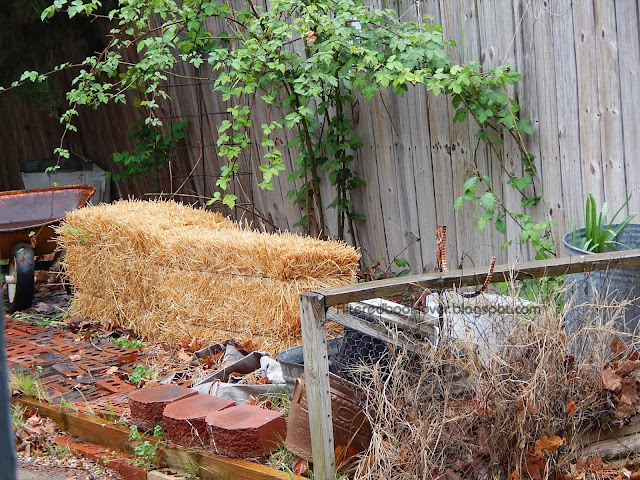 Two of the four hay bales are now in the garden.  I allowed this area to go last year, since I chose not to plant anything there. It needs to be cleaned up, and made presentable.  You can see something is growing in my metal compost container, too.

Thanks for joining me today as I updated you on the status of my front flower "bed" and my now defunct veggie garden.  I am truly grateful for your visit.  I hope to take a day off soon and just catch up with everyone.

It's always good to see new growth in spring, but a garden is very time consuming....I just have balcony flower boxes, and even they are a lot of work. Have a great day, Valerie

You are a lucky gardener dear Elizabeth! I love the sustainability that is shown in all you do and crete! AWESOME!

I enjoyed the walk around your garden. It's been too rainy and the ground too soft and muddy to do anything in mine. I hope to be able to get outside a bit today to pick up branches that came down during Winter and Spring storms.

I have been doing some heavy duty garden work too. I know what you mean by being tired. And a little sore. My next project is to edge my rose bush garden with some pavers. Kind of like you and the bricks. But you have so much beautiful green Elizabeth. Holy cow. I am in awe but also jealous. My irises are about 1 inch up and you have buds. And it is only April. But this is probably normal for you folks "down south" of where I live. Hee-hee. Happy gardening. hugs-Erika

I enjoyed your garden tour. It's nice to have flowers in stages :) Your tulips are still pretty and the irises will be in bloom soon after the tulips are but a sweet memory. I hope all your hostas survive. The little one may just need more time. It'll be interesting to see how your veggie/herb garden turns out this year. I'm wishing for a new arrangement on my patio, but ideas fail me. I need to reduce the number of pots that have to come in during the winter, and that's not a quick project. Happy gardening!

OOhh you have a lot of work Elizabeth !! But your garden is big and I´m sure you´ll plant many flowers. Love your flowers, the tulips are beautiful, love the colours. Hope to see your new veggie garden.
I wish you a very nice afternoon,
Big hugs, Caty

Lovely post and so pleased you are now back on your original blog :)

All the best Jan

It was good to see your garden, the plants look so healthy and the flowers in bloom looked lovely. You must be tired after all this work. I look forward to seeing what you had for your Birthday breakfast.
It must be a relief to get your own blog back.
Yvonne xx

What a nice update on your life, Elizabeth. I get the reference to the "no names, no faces group" because my hubby is like that. Though I have used his first name from time to time and a life sketch of his back - lol. Shh!

I know you don't sleep much but, given that, I'm amazed that you have so much energy during your waking hours! Your hosta are lovely. I hope #3 perks up. Obviously they do well in your climate.

I planted a gazillion bulbs in our (rocky ground) in NJ and had the same experience as you. I had visions of daffodils pushing through the cold ground and fields of tulips like you see in photos of Holland. Not to be for me. Maybe if I moved to Holland ... ;-) Eileen xx

Your gardens look lovely Elizabeth. I also wanted to share with you that I posted photos from a carousel museum I went to this weekend. I know they're not rocking horses, but I thought you might enjoy seeing them.